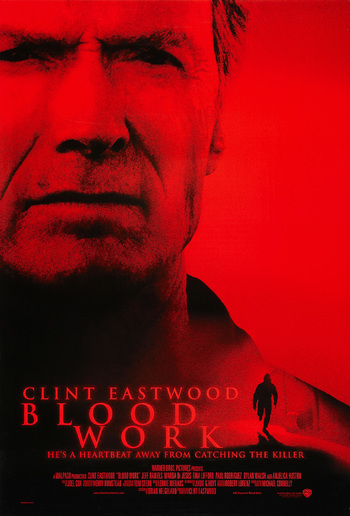 Blood Work is a 2002 crime drama directed by and starring Clint Eastwood, based on the 1998 novel Blood Work by Michael Connelly.

Eastwood plays Terry McCaleb, an FBI criminal profiler. While investigating a serial killer's crime scene, McCaleb spots a figure with blood on his shoes and gives chase, only to suffer a heart attack. A two-year Time Skip reveals that McCaleb has had a heart transplant and is retired from the FBI, living on his boat. He is approached by a nurse, Graciela Torres, who asks him to investigate the unsolved murder of her sister. She tells McCaleb that her sister was the donor of McCaleb's heart. McCaleb takes the case, and finds even darker connections between himself and the crime.

Tropes found in the film and/or the novel: