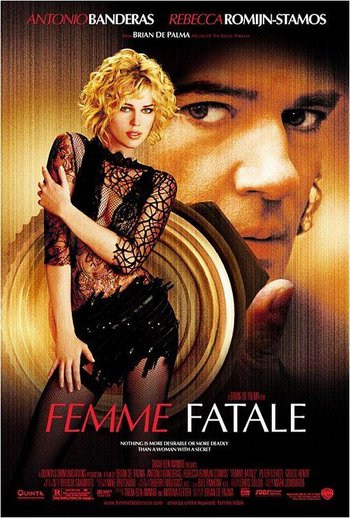 Mercenary thief Laure Ash (Romijn) participates in a diamond heist in Cannes. However, Laure double-crosses her accomplices in the middle of it and escapes to Paris with the diamonds. In Paris, a series of events causes Laure to be mistaken for her own doppelgänger, a recently disappeared Parisian woman named Lily (also portrayed by Romijn), and to eventually take her identity for good after Lily commits suicide, and she leaves the country for America.

Seven years later, Laure (in her identity as "Lily") resurfaces in Paris as the wife of the new American ambassador to France. After arriving in France, a Spanish paparazzo named Nicolas Bardo (Banderas) takes her picture. The picture is displayed around Paris, and her ex-accomplices spot Bardo's photo. Now exposed to her vengeful ex-accomplices, Laure decides to manipulate Bardo into following through with a plan to save her own skin, and in the process, they begin an affair. But things become more and more complicated, not helped by Bardo having a crisis of conscience...