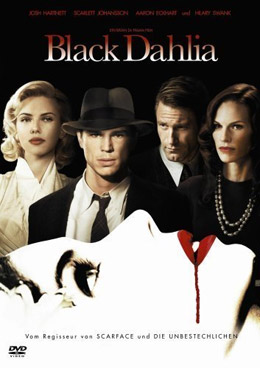 Inspired by the most notorious unsolved murder in California history.
Advertisement:

The Black Dahlia is a 2006 neo-noir crime film directed by Brian De Palma and starring Josh Hartnett, Aaron Eckhart, Scarlett Johansson, Hilary Swank and Fiona Shaw, based on the novel of the same name by James Ellroy. The film tells a fictional story based around the real life murder of actress Elizabeth "Betty" Short (played by Mia Kirshner) who came to be nicknamed The Black Dahlia. Hartnett and Eckhart play two boxers-turned-police detectives who are called on to investigate Short's murder and end up uncovering a (fictional) conspiracy around the whole thing.

The film is largely remembered as one of the most confusing and incoherent stories of all time, partially due to several scenes being cut leaving behind Plot Holes; Ellroy himself loved the original edit and refuses to say a word about the final version.

Not to be confused with the 1998 adventure game. Or with The Blue Dahlia film from 1946, for that matter.