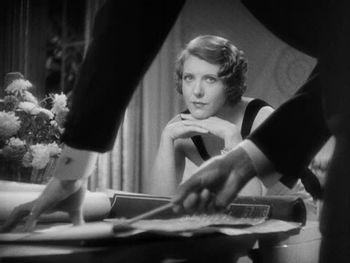 1933's Female features Ruth Chatterton as Allison Drake, the president of a motor car company. By day, she runs the factory with an iron fist and business savvy. By night, she invites male employees to her mansion and seduces them with the aid of vodka. Often, these men fail to separate business from pleasure the way she can, so she has to transfer them to "our Montreal office". This happens a lot. But when she meets Jim Thorne, an engineer hired by Drake Auto to design an automatic gearshift, she starts having emotional feelings she's not prepared to deal with.

Female was directed by Michael Curtiz. It is a good example of the more "adult" tone struck by Hollywood films in The Pre-Code Era—a film made after The Hays Code was enforced in 1934 could never have had a plot like this.