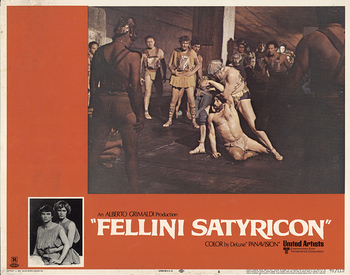 It is a "free adaptation" of Roman novel The Satyricon. The setting is The Roman Empire, in a vague time frame that seems to be sometime around or after the reign of Nero. A young man named Encolpius has lost his lover, a teenaged boy slave named Giton, to his roommate, Ascyltus. Encolpius, looking for Giton, finds that he has been sold to an actor named Vernacchio. Encolpius reclaims Giton from Vernacchio, only for Giton to choose Ascyltus as his lover and go away with him. Their tenement building is promptly wrecked in an earthquake. Encolpius then meets a poet, Eumolpus, who invites him to a party...

...and many more weird and surrealistic things happen as the protagonist wanders through a bizarre version of Ancient Rome that plays out like Spartacus on hallucinogens.