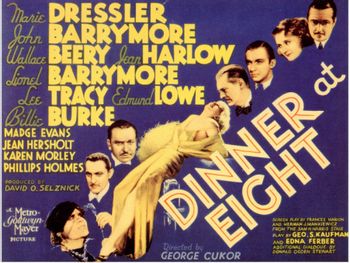 Dinner at Eight is a 1933 film directed by George Cukor and featuring an All-Star Cast. The movie features a half-dozen plotlines concerning the various members of the New York elite that have been invited to a society dinner.

Dinner at Eight is a mix of drama, comedy of manners, and farce. It was adapted from a stage play by George S. Kaufman and Edna Ferber.

There was a made-for-TV movie remake in the 1980s that updated some of the cultural references (Larry Renault was addicted to cocaine rather than an alcoholic, for example, and Oliver Jordan had cancer. Kitty refers to 'computers' doing all the work. Etc.), and was adapted into an opera in 2017.