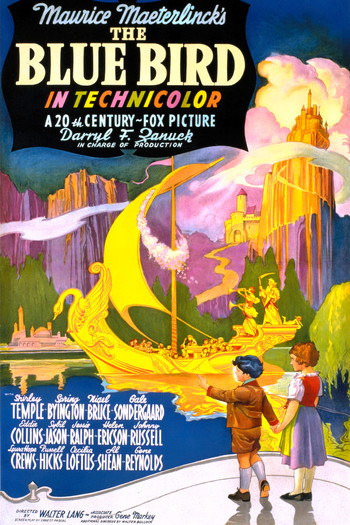 Mytyl: Why do they have to have war? What makes war, anyway?
Daddy Tyl: The same things that make trouble everywhere. Greed. Selfishness. Those who aren't content with what they have.
Mytyl: But you're not like that, Daddy. Why should you have to go?
Daddy Tyl: That's what's wrong about it, Mytyl. You can't be unhappy inside yourself without making others unhappy, too.
Advertisement:

A play written in 1908 by Belgian playwright Maurice Maeterlinck. It has been adapted into five films and an anime series, with the best-known version being the 1940 film starring Shirley Temple, which provides the above dialogue.

The original play tells the tale of Mytyl and Tyltyl, two poor children. One night an old crone (who resembles their neighbor Berylune) arrives at their cottage and tells the children they must seek the Bluebird of Happiness for her sickly daughter. She gives the boy a cap with a magic diamond that reveals the true spirits (anthropomorphic personifications) of all things — including their cat Tylette and their dog Tylo, and those of Sugar, Bread, Milk, Water, Fire, and Light. This band serves as their companions as they venture through many lands and encounter everyone from the spirits of their grandparents to the decadent Luxuries to the simpler but more enduring Happinesses to Father Time himself. The Blue Bird proves elusive at every turn, but upon arriving home it turns out to be their own pet bird, which they give to Berylune's daughter. It flies away, and Tyltyl asks the audience to help them find it again...

In the 1940 film, Mytyl (Shirley Temple) is a selfish bratty girl who always complains about not having everything the wealthy children have. One day she catches a bird in the royal forest and keeps it for herself rather than giving it to her bedridden sickly friend. Later, after she complains to her parents about how poor they are, her father gets a message telling him he must go to war. That night, she's visited by the fairy Berylune (Jessie Ralph) who tells her and her brother Tytyl (Johnny Russell) that they can be happy if they find the Blue Bird of Happiness. The fairy transforms their dog Tylo and their cat Tylette into humans (Eddie Collins, Gale Sondergaard) to help them and calls the Anthropomorphic Personification of Light (Helen Ericson) to guide them. Together they visit the past, the land of luxury, the forest, and even the future, searching for the Blue Bird. Along the way, they learn some important lessons happiness and return empty-handed. Only to find that the bird Mytyl caught at the beginning was blue all along. She gives it to her friend and it flies away, but she says it's all right, because we all know where to find it again.

The second most famous adaptation, and the last film version, was directed by George Cukor in 1976 and was the first-ever cinematic collaboration between the U.S. and the U.S.S.R., featuring Elizabeth Taylor (Mother, Berylune, Light, and Maternal Love), Jane Fonda (Night), Cicely Tyson (Tylette), Ava Gardner, and Russian performers in most of the minor roles. Due in part to the severe culture clash between the Americans and Russians, the shoot was difficult and the expensive result (while quite faithful to the play) was widely derided. It bombed at the box office, and has never had a legit video release in the U.S.

The 1918 film version, starring Tula Belle as Mytyl and Robin Macdougall as Tyltyl, is less well remembered today, but was inducted into the National Film Registry in 2002.

The anime series lasted 26 episodes on Fuji Television from January to July 1980 and was directed by Hiroshi Sasagawa (Speed Racer) and developed by a team including many veterans of Space Battleship Yamato, notably Yoshinobu Nishizaki and Leiji Matsumoto. It moved the setting to the then-modern world of 1980 and introduced a number of fantastical elements not present in other versions. Unreleased in English, the anime was also screened in Italy, France, Canada (in French), and Poland.

A second anime (an hour-long OVA) was made in 1989 by Sanrio, featuring their popular characters Kiki and Lala (aka the Little Twin Stars) as Tyltyl and Mytyl. This adaptation was part of Sanrio World Masterpiece Theater/Sanrio World of Animation which were screened at three theaters in Japan during the summers of 1989-1991.

Maeterlinck also wrote a much lesser-known sequel to the play, The Betrothal, about Tyltyl, now sixteen years old, looking for his true love.

The 1918 version includes examples of:

The 1940 version includes examples of:

The 1976 version contains examples of:

The 1980 anime version contains examples of:

Tropes specific to the sequel, The Betrothal: