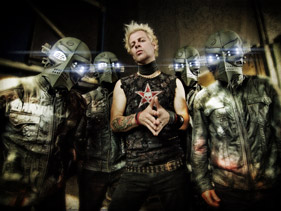 Spider One and his cohorts.
"Spinning complacently in the darkness, covered and blinded by a blanket of little lives, false security has lulled the madness of this world into a slumber. Wake up! An eye is upon you, staring straight down and keenly through, seeing all that you are and everything that you can never be. Yes, an eye is upon you, an eye ready to blink. So face forward, with arms wide open and mind reeling. Your future has arrived... are you ready to go??"
Advertisement:

Powerman 5000 are a slightly unorthodox industrial rock band based out of Boston, Massachusetts, fronted by vocalist Spider One and a revolving door lineup of musicians. Making their major label debut with Mega Kung-Fu Radio, a rerelease from their original independent album The Blood Splat Rating System, the band soon emerged with their trademark high-energy sound, used to good effect on the follow-up and their most famous album, Tonight The Stars Revolt! These albums established their obsession with themes of Science Fiction, and the band were even known for performing in space suits.

The band had a new album, Anyone For Doomsday? primed for release in 2001 but Spider One, afraid of being pigeonholed in this sound, aborted it just before its release (also due to some band members jumping ship at the time). The eventual new album finally arrived in 2003 and was entitled Transform, which was released to mixed reviews due to the band ditching their sci-fi gimmick and adopting a slightly punky flavor, as well as a new focus on social commentary. The band have continued to mine their energetic trademark sound to the present day, with the albums Destroy What You Enjoy and Somewhere On The Other Side Of Nowhere. Copies, Clones & Replicants, a Cover Album, appeared in August of 2011. Their latest albums, Builders Of The Future and New Wave were released in May of 2014 and October of 2017, respectively.

Spider One's older brother is also a musician. You might have heard of him.