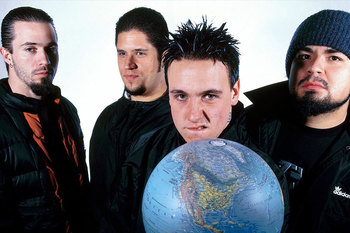 "Cut my life into pieces,
This is my last resort,
Suffocation,
No breathing,
Don't give a fuck if I cut my arm, bleeding"
— "Last Resort", Infest
Advertisement:

Papa Roach is a rock band that was formed in 1993 in Vacaville, California. Lead singer Jacoby Shaddix and drummer Dave Buckner met on the Vacaville High School football field during an intense match, where the two ended up talking about music. They were later joined by trombonist Ben Luther and bass guitarist Will James. Soon after trombonist Ben Luther was replaced by lead guitarist Jerry Horton from nearby Vanden High School. Horton was introduced to the band through his girlfriend, who was a fan. However, Jerry was at first apprehensive about joining the band because Jacoby, Buckner, and Will all went to different high schools. The band's name comes from Shaddix's step-grandfather, Howard William Roatch, who was nicknamed Papa Roach. Roatch committed suicide in 2006 after he was diagnosed with terminal cancer.

In February 1997, the band released their first album of Nu Metal, Old Friends from Young Years. Later in 2000, they released their major-label debut album titled Infest. The first single from the album was "Last Resort" which was a big hit and still receives high radio play to this day. Infest was followed by 2002's Lovehatetragedy. In 2004 the band departed from the Nu-Metal sound to Alternative Rock with Getting Away With Murder. The album's singles were big hits with "Getting Away With Murder" and "Scars". The Paramour Sessions was released in 2006 and the album's first single "...To Be Loved" was the theme for WWE Raw from 2006 to 2009.

Cut my tropes into pieces/This is my last resort: