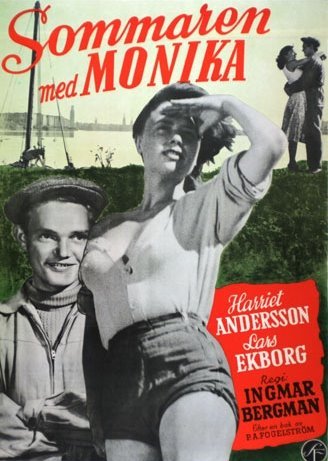 Summer with Monika (Swedish: Sommaren med Monika) is a 1953 film by Ingmar Bergman, starring Harriet Andersson as Monika and Lars Ekborg as Harry.

In the working class part of Stockholm, two teenagers are stuck in dead end jobs. Harry is picked on and browbeaten at the porcelain shop where he works as a delivery boy; Monika is constantly sexually harassed at the grocery store where she works. They meet and run off to escape the dreary world. They have a carefree romance celebrating their youth and their love, and they try to live by their rules against the wishes of their parental and social norms. But alas, summer is ending, and reality comes in and gives new challenges to the couple.

The film was Bergman's international Breakthrough Hit, and made Andersson a global sensation. Sensational in America for its nudity (very brief and tame, but this is The '50s). Noted exploitation producer and director Kroger Babb released it in America under the title Monika, the Story of a Bad Girl.