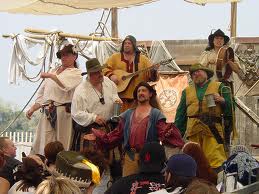 The Poxy Boggards performing at the Southern California Renaissance Pleasure Faire.
The Poxy Boggards are a musical group (or as they would call themselves, "a drinking group with a singing problem") from Southern California, formed by friends Stuart Venable and Bill Roper (former CEO of the gaming company Flagship Studios). They perform traditional as well as original Irish drinking songs, sea shanties and folk songs, featuring rich harmonies and accompanied by traditional instruments.
Advertisement:

As most drinking songs tend to be bawdy, their lyrics are often NSFW. Their stage shows often include comedic banter interlaced with Double Entendres.

The Boggards began in 1994 at the Southern California Renaissance Pleasure Faire, and since then have become popular at Ren Faires and also with Irish folk movement, playing with bands such as The Fenians.

The Poxy Boggards have examples of: