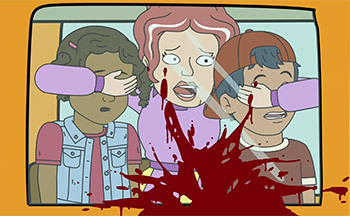 Perhaps someone is letting loose a torrent of profanity. Perhaps there's a streaker running past. Perhaps somebody is about to rip out somebody's heart. Whatever the case, there are children around, and they are being exposed to some highly inappropriate content. Quick! Cover their eyes/ears!

This trope generally depends on the idea that Children Are Innocent, and furthermore, should stay innocent. Children should be protected from anything considered Harmful to Minors. Usually it's a parent who will do this. This can be played for laughs if the “innocent” kid still understands what's going on (e.g. The Simpsons episode “Bart Sells His Soul” where Todd still repeats a curse word after a parent covers his ears).

Usually the scene that causes this is concealed in a Discretion Shot.

For some, doing so may only make the "innocent" child want to see/hear the denied spectacle even more.

Compare Not in Front of the Kid, Take Five, and "I Can't Look" Gesture.