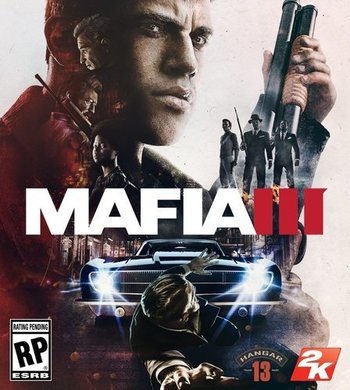 Family is who you die for.
"You people speak of family. Like you know what that word means. But you were born into yours. You never had to go looking for some place to belong. Never had to bleed in a jungle just to find your real brothers. Never had to turn your back on God just so someone would finally treat you like a son. Family. To you it's just a goddamned last name. If you knew what family really meant... you never would have fucked with mine".
— Lincoln Clay, Reveal Trailer
Advertisement:

Mafia III is the third game in the Mafia series. It is developed by Hangar 13 and was released in October 7, 2016.

Taking place in the city of New Bordeaux in the year 1968, the game puts you in the place of Lincoln Clay, a mixed-race Vietnam veteran and a member of the Black Mob who seeks vengeance on the Italian Mafia for wiping out his adoptive family.

The game features a denser world than before, with a focus on building your own criminal empire by taking territories and criminal enterprises from your enemies and assigning them to your lieutenants.

Three story-based DLC were later released for it:

A Definitive Edition update of Mafia III was released in May 2020, with pre-existing owners of the PS4, Xbox One, and Steam releases getting the update for free.