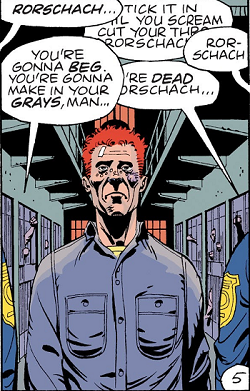 A place where everybody knows your name.
"In prison, there is no creature lower than a sex offender. Even snitches get a pass before these guys. S-O's, chomos, pedophiles; the nicknames all mean the same thing, and they help average convicts differentiate themselves from those they like to believe are the real monsters."
— Why Are So Many Sex Offenders Getting Murdered in California's Prisons?

Mainstream criminals have a morality scale of their own (though in some cases, said morality may involve them being worse). Many of them despise police officers and prison guards (including cops/guards sentenced to prison), snitches, sexual offenders (especially child rapists), and sexual minorities or members of certain racial/ethnic groups. Truth in Television featured in many works of fiction.

If prisoners of these groups get locked up together with mainstream criminals, they might be beaten up in a Prison Riot, become the victim of Prison Rape (a kind of Karmic Rape for sexual offenders), or even murdered, typically with a Sinister Shiv.

These groups might fear prison worse than death. If they survive a prison sentence, expect them to be willing to do anything to avoid going back.

See also Asshole Victim as a possible outcome, Moral Event Horizon for atrocities that may make them unwanted, Blue-and-Orange Morality for the peculiar rules that dictate what is acceptable and whatnot, and Even Evil Has Standards for one possible reason that some prisoners become this.