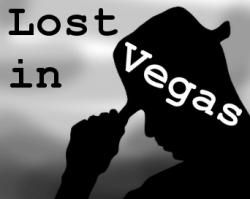 Lost In Vegas is a video game created by Big Bling Thing for Kongregate in 2016. It's a text-based adventure in which you play as a traitor Russian spy who was banished from the motherland, during the peak of the Cold War. He finds himself in the haphazard city of Las Vegas, and must find his way to Mexico.
Advertisement:

You start off with twelve rubles, a set of clothes, and a vague understanding of English, and have to pick choices to advance.

Not to be confused with Deja Vu II Lost In Las Vegas.