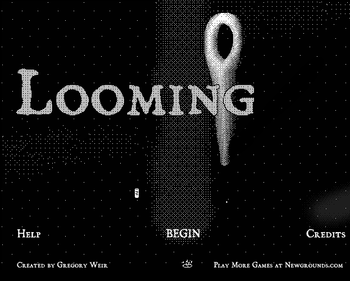 This game is about two lovers named January and September.
No, wait; it’s about a group of people who don’t believe in the sky.
No, it’s about a pantheon of scientific disciplines.
Or maybe it’s about an ancient beast who knew exactly when it was going to die, and how.
It’s about a place. A place called Looming.

Looming is an Adobe Flash game by Gregory Weir, which can be found here

. Saying nearly anything else about it is a spoiler, so it'd likely be best for you to go play it now before you read the page.

You are September, a researcher sent to explore the strange land of Looming. You write and read several letters back and forth with your love, January. Through picking up and examining relics on the ground, finding secret pillars, and entering the several portals that are opened as you do this, you learn about two neighboring races, a creature, and a very peculiar natural event known as the Epiphany.