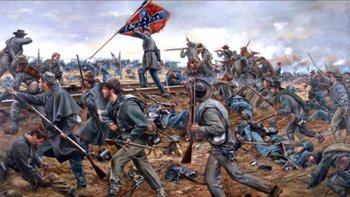 In the US, once it became clear that war between the abolitionist North and the slave-holding South was inevitable, the Confederate States quickly passed a motion to get an army together for what would eventually prove to be a futile war.

Compared to the North, the South had a relatively easy strategy: a defensive war. They knew the land and only had to bleed out the Union, whereas the North had a grand strategy to cut off the southern states from European trade and split it in two with the capture of the Mississippi. However, the South was pretty much doomed from the start, because the North had a much larger population and the vast majority of America's productive industry, forcing the agrarian South use their diminishing balance of trade to smuggle munitions from abroad through an ever-tightening Northern blockade as their armies shrank through unreplaceable losses. In truth the Rebels didn't have repeaters: they couldn't make them, afford to buy them or even produce ammunition for those they captured. The hope that England would be forced to intervene on their side by the power of "king cotton" proved unfounded because England had other sources for cotton (most notably British India) and had already stockpiled much more cotton than the South realized. And England was even more dependent upon Northern wheat. Even if English industry had been as reliant on Southern cotton as the believers in "king cotton" believed, English survival relied on the North's food exports. And, of course, there was that whole slavery thing...note The Slavery Abolition Act 1833 had banned slavery in the British Empire decades earlier, and slavery was deeply unpopular among the British people. While many English elites hoped for a Confederate victory to weaken the United States, the common people wanted the Confederacy crushed and many even emigrated to the United States to fight in the Union army.

Nevertheless, the South did have a strong advantage in leadership. For the first half of the war, Robert E. Lee and Stonewall Jackson were an almost unbeatable team. Lincoln, on the other hand, fired his Union generals after almost every single engagement. It got to the point where Lincoln felt he had to reappoint General George McCellan despite the fact that he was a Miles Gloriosus of an insubordinate coward of a battlefield commander whose most notable victory was at Antietam which was more of a glorified stand-off because he had a lucky break with discovering secret battle plans of Lee's that he almost frittered away in his hesitancy to act on it.. Nevertheless, their tactics only slowed the inevitable, as the North had a much larger manpower pool and industrial capacity, and Southern generals proved no better at preserving their men's lives. Many historians agree that even if the South won engagements such as Antietam and Gettysburg, they still would have been overwhelmed in the long run. For instance, while a Confederate victory at Antietam would have forced Lincoln to delay announcing the Emancipation Proclamation without seeming desperate and allowed European nations to consider intervening, Lee winning at Gettysburg would likely have meant little considering General Grant captured the city of Vicksburg at the same time, splitting the Confederacy in two by seizing total control of the Mississippi river. When Grant was assigned command of the Army of the Potomac, Lee suddenly faced a Union opponent who was a skilled big picture strategist with the will to use his superior forces to grind Lee down relentlessly, combined with Gen. William Tecumseh Sherman who had the determined pragmatic ruthlessness to destroy the Confederacy's morale and viability by cutting a destructive swath through it. By 1864, the only hope the South had to win was to hold out in sieges from the Union army until the North, sick of war with no end in sight, would vote for a government more open to a peace agreement. But then Atlanta fell and Lincoln was reelected, showing everyone that the Confederacy had lost.

The average southern soldier came from a rural, agrarian background and were generally used to privation and hardship and familiar with firearms and horses. The first allowed a great deal of strategic and tactical mobility (especially in the case of Jackson's famous "foot cavalry") and the last gave the South an inherent advantage in cavalry that they would maintain until the last year of the war. If Johnny Reb had one disadvantage against the more citified Billy Yank (other than a general lack of resources) it was disease resistance, as surviving city life in the 19th century required a powerful immune system.

As for their navy, the South did have two claims to fame: the ironclad Virginia (née Merrimack), one of the first iron-plated vessels; and the submarine Hunley, the first to sink an enemy ship (which proved to be a Mutual Kill, as the Hunley sank with all hands soon after). Still, they were never able to break the Union blockade. A number of foreign-built high seas raiders, such as CSS Alabama, are also well-known among history buffs, notable for causing a decade-long diplomatic dispute between US and Britain (who built and sold the ship) and the fact that these ships never actually came anywhere near the waters of Confederacy, as they operated from overseas bases with mostly mercenary crews except for their officers. Some, such as French-built ironclad raider CSS Stonewall were taken over by US government after the war and sold to foreign countries where they were occasionally involved in other historical events (The Stonewall, for example, became the Japanese Kōtetsu and later the Azuma and was involved in the wars of the Meiji Restoration).