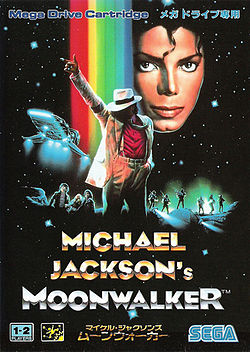 Two versions of this Michael Jackson game were produced: an isometric action game for arcades, and a Shinobi-like Platform Game for the Sega Genesis. (There was also a computer game titled Michael Jackson: Moonwalker, which has little in common with the other versions.) A port was also released for the Sega Master System and Sega Game Gear.

Shares a loose continuity with the Space Channel 5 series, with Jackson's adventures being canon to the games, and the man himself appearing in a supporting role.

This game by Michael Jackson contains examples of: