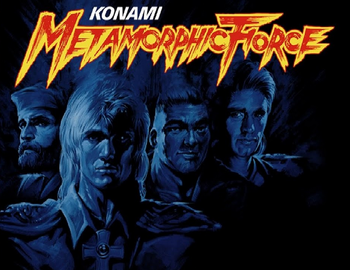 Metamorphic Force is an arcade Beat 'em Up made by Konami and released in 1993, and their final foray into the genre along with Violent Storm.
Advertisement:

The evil emperor Death Shadow rose from his grave to rule the world once and for all. In response, a sword-wielding goddess called upon the souls of four ancient beasts, whose corresponding powers lie within the four men who are able to defeat Death Shadow.