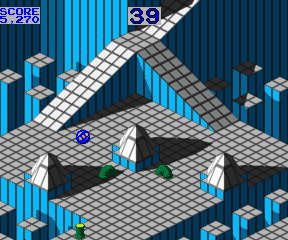 Marble Madness is a 1984 arcade game by Atari, created by Mark Cerny. The game is an isometric puzzle game, controlled by a trackball, where you lead the eponymous marble to a goal while dodging obstacles through six courses with artwork inspired by M. C. Escher. The game also features two-player competitive mode.

Surprisingly, a sequel, titled Marble Man: Marble Madness II was in the works for release in 1991, but was cancelled at the prototype stage due to poor reception in testing markets and fear of it flopping against games such as Street Fighter II.