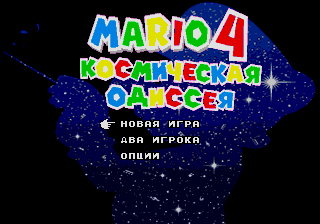 Not quite those Odysseies In Space.
Advertisement:

Mario 4: A Space Odyssey is an Unlicensed Game for Sega Genesis developed by BMB and published by KDS around 2011. It is a sequel to BMB's Mario 3: Around the World.

One night Mario and Luigi watched stars falling from the sky, then they saw a strange star falling behind a Mushroom Hill which attracted their attention. As they quickly found out, it was not a star, but a spacecraft. The creature inside it told them there was a threat in their galaxy. If Mario doesn't stop it (with his army, apparently) the Mushroom Kingdom will also be doomed.

This is a standard Platform Game similar to official Super Mario Bros. games, only the controls are much stiffer. Enemies from Mario & Luigi also appear.