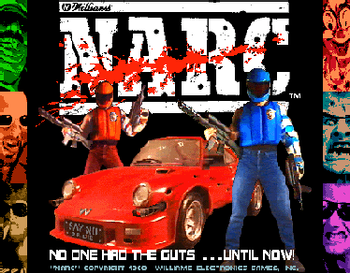 Pictured: The war on drugs.
"Say no or die!"
Advertisement:

NARC was an Arcade Game released in 1988 by Williams Electronics where one or two players take part in the War on Drugs.

The player controls one of two members of N.O. (Narcotics Opposition) code-named "Max Force" or "Hit Man" as they wage war on drugs. And we do mean war. The entire game consists of shooting drug dealers and other crooks with machine guns and rocket launchers en masse. For a bit of variety, sometimes you run them over with your car instead.note While you can arrest some enemies, this is harder, takes more time (therefore exposing you to more damage), and you can only arrest so many enemies per level before it stops working, leaving lethal force your only option. Also, some enemies are immune to arrest. Your ultimate goal is to defeat the man behind the entire operation, "Mr. Big". Naturally, the players do this by making him explode. Turning the murder-factor Up to Eleven was essentially the only way to make teenagers pay attention to a game with an anti-drug message.

NARC is notable for being the first arcade game to use the 32-bit TI TMS34010 processor, which would run many of Williams and Midway's later titles, most notably the early Mortal Kombat entries.

The Nintendo Entertainment System version, developed by Rare, was released in 1990 by Acclaim. It was also released on various home computer formats in 1990 courtesy of Ocean Software. An emulation of the original arcade game was included in the compilation Midway Arcade Treasures Vol. 2, released for the PlayStation 2 and Xbox.

Max Force appears as one of the main characters of the "Power Team" animated segments in the Acclaim-sponsored TV show Video Power, where Mr. Big and his henchmen, Dr. Spike Rush and Joe Rockhead, also served as the show's main villains.

A remake was released in 2005, changing the formula from an arcade shoot'em up to a Grand Theft Auto-style experience. It had rather mixed reviews.