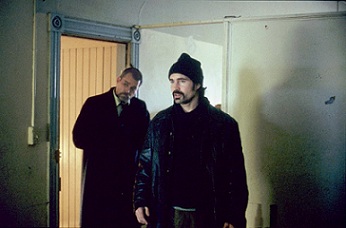 Narc is a 2002 crime film written and directed by Joe Carnahan in his first major film production. It stars Jason Patric and Ray Liotta.

The film starts with an undercover narcotics officer Nick Tellis (Jason Patric), pursuing a drug dealer after his cover has been blown, ending in the death of the drug dealer as well as a stray bullet causing the miscarriage of a pregnant woman. Eighteen months later, Tellis is persuaded to investigate the cold-blooded murder of another undercover narcotics officer named Michael Calvess. He is partnered with another detective, Henry Oak (Ray Liotta). Nick Tellis tries to seek out the real reason for Michael Calvess's death behind his partner's back, and we are given a glimpse into the seedy side of police work in a poorer area. The film was well received, and made back twice its fairly modest production cost.

For the Video Game from Williams Electronics, click here.