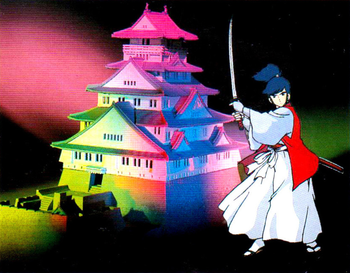 The Mysterious Murasame Castle is a medieval Japanese fantasy video game created by Nintendo and released in 1986 as the second original title for the Famicom Disk System, after The Legend of Zelda, to which it has some resemblance. The game has been occasionally rereleased, eventually coming to Europe and America as well courtesy of the Nintendo 3DS Virtual Console in 2014.

The game takes place during the Edo period, where Murasame and four neighboring castles have been possessed by a demonic force. It falls to a young swordsman named Takamaru to defeat Murasame.

Despite having only one game in the series (and one that was not released outside of Japan for twenty-eight years), this game had had a rather interesting legacy. Fuji TV developed a live-action TV drama loosely based on the game with Sanae Jonouchi starring as Kayo and the Snow Princess and Masaki Kyomoto as Seikichi and the White Rabbit/Takamaru. Later, Takamaru was featured in the Wii version of Samurai Warriors III, which also included a full remake of his game. Takamaru also appeared in Captain Rainbow as one of the inhabitants of the island, and Nintendo Land has an attraction based off of The Mysterious Murasame Castle. Finally, Takamaru appeared in Super Smash Bros. Brawl as a Sticker, and he appeared in the fourth and fifth games as an Assist Trophy, and music from Nazo no Murasamejō featured in both games. There's also a Mii costume based on him.