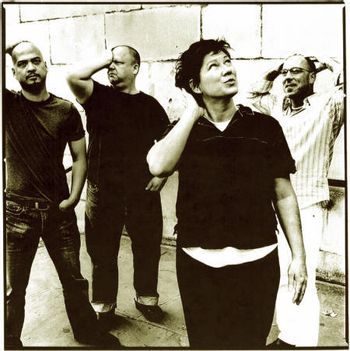 These are the underwater guys who control the sea. (L to R: Santiago, Francis, Deal, Lovering)
"If man is five
Then the devil is six
And if the devil is six
Then GOD IS SEVEN!"
— Pixies, "Monkey Gone to Heaven", Doolittle
Advertisement:

The band's original members were guitarist/vocalist Black Francis, bassist/vocalist Kim Deal, guitarist Joey Santiago and drummer David Lovering. Their musical style is distinguished by its fusion of Surf Rock melodies with Punk Rock aesthetics and (later on) Psychedelic Rock influences, being capable of both earworminess and brutal aggression.

Pixies' recording career started in 1987 with the release of the Come on Pilgrim EP on British label 4AD Records. They released four more albums on the same label (with Elektra Records handling them in the US, starting with Doolittle) until officially disbanding in 1993 due to exhaustion after supporting U2 on the Zoo TV tour and intra-band tension, mostly over Francis marginalizing the others' contributions (especially Deal's). Francis changed his name to Frank Black and started a solo career, Deal found success with The Breeders, Santiago worked in soundtracks and his band The Martinis and Lovering alternated drumming with a hobby as a magician. The band reunited in 2004, took a hiatus in 2007, re-reunited in 2009 and is still touring today. In 2013, the group (with the exception of Kim, who officially left halfway through the year) released their first new material in over 20 years: the single Bagboy and the EP aptly titled EP1. An EP2 and EP3 followed in 2014, and the three EPs were compiled into the band's first album in 23 years: Indie Cindy. The band's current bassist is former A Perfect Circle member Paz Lenchantin, who joined the group in 2014.

Despite the name, there is no Manic Pixie Dream Girl in the band, though Kim Deal's fans may beg to differ. Joey found the word in a dictionary, and they liked it enough to use it as a band name.

Kim Deal also sang the duet, a cover of Chris Bell's "You And Your Sister" with Tanya Donelly (The Breeders) on the album Blood (1991) by This Mortal Coil.

Their discography's length is inversely proportional to its influence: