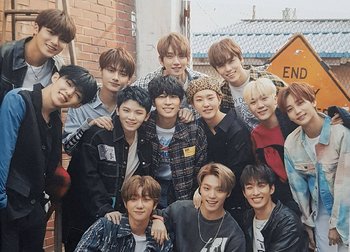 Seventeen (often stylized as SEVENTEEN and shortened to SVT) is a 13-member South Korean boy band who debuted under Pledis Entertainment on May 26, 2015. Their thirteen members are divided into three units: the Vocal Unit, the Hip-Hop Unit, and the Performance Unit.

The group have produced three studio albums, with their first, Love & Letter, releasing in 2016 and followed by 2017's Teen, Age and 2019's An Ode. On March 17th, 2022, it was revealed that they would release their first theatrical film, titled SEVENTEEN POWER OF LOVE: THE MOVIE, with a worldwide release planned for the 20th and 23rd of April.