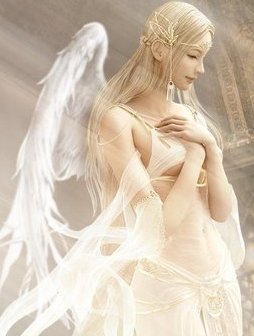 Heavenly beings that demonstrate their goodness and divinity through their equally beautiful physical appearance.

We all know angels in traditional religion run the gamut from being light-based mind shattering horrors to the basically human, and the human flavor are almost always divinely hot. This rule is almost without exception.

This trope is largely derived from Greek theories of divinity and beauty. Philosophers like Plato and Aristotle thought that the gods were closer to Goodness Itself than humans and as such should be more perfect in all dimensions, including aesthetics. This theory that ultimate goodness includes perfect beauty would become re-popularized in the context of the angels around The Renaissance, after philosophers like Thomas Aquinas and artists like Petrarch attempted to fit the Greek theory of beauty into Christianity.

As one would expect, this is an exceptionally popular trope in Renaissance and Romantic-era religious Art. More Old Testament based descriptions of angels and God appearing as benevolent terrors that kill those who see them would go out of style until modern internet culture's obsession with making things Darker and Edgier. Even still, if a work is trying to make a New Testament-looking angel, this is trope they go to, whether in Film, Television, Video Games, or any other new medium.

A Sub-Trope of Inhumanly Beautiful Race, when it doesn't apply to human saints, and Beauty Equals Goodness, since the trope relies on the audience assuming physical beauty reflects the inner perfections of the Heavenly Host. The need to make non-humans beautiful also lead to the Winged Humanoid trope, since artists know what beautiful humans look like better than anything and the wings quickly establish divinity, since they're used to fly around Heaven Above. This trope almost always corresponds with God Is Good when it applies to God. If it doesn't then, the work is probably using Light Is Not Good because the audience has a tradition-ingrained association with the divine and the beautiful. Divinely Appearing Demons often imitate the divine by taking on the beauty and light this trope associates with them.

Contrast Hot as Hell and Angelic Abomination. Their boss may also be a Hot God as well. Not related to Lovely Angels.