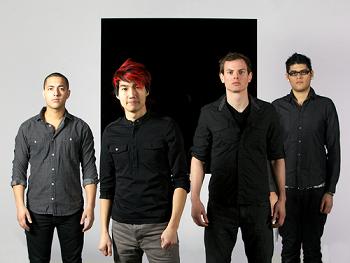 Pinn Panelle are an electronic rock band originating in 2007 in Boston, USA. They're known for their unique mixture of hard rock, electronica, classical music, and dubstep, which they have termed "Epic Music." They've done several covers on YouTube of electronic artists such as Skrillex and Nero, which showcase their original methods of turning rock instruments into electronic ones. See for yourself what we mean.

(Pronounced "Pin Puh-nell")
"Pinn Panelle comes from the words "Pin Panel" being made to sound like a human name. "Pin Panel" refers to the face of a Pachinko game machine, and to us, the act of turning those words into a human name relates to how people turn to technology and other artificial things for comfort, or for love."

They've released one studio album, and are currently working on a second, with one single released so far.

As of March 7th, 2013, Nathan Navarro and Jonah Wei-Haas have left the band. They have been replaced by Matt "Mukatu" Nyberg and Joel Darling for live performances until the band can recruit new permanent members.