Music / A Momentary Lapse of Reason 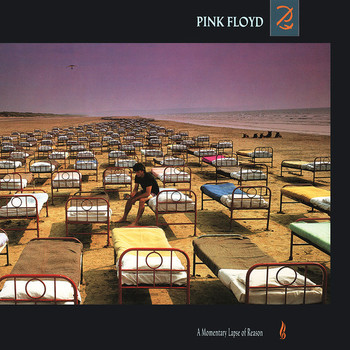 Is it only a dream that there'll be no more turning away?
"One slip and down the hole we fall
It seems to take no time at all
A momentary lapse of reason
That binds a life for a life
A small regret, you won't forget
There'll be no sleep in here tonight."
—"One Slip"
Advertisement:

A Momentary Lapse of Reason is the thirteenth studio album by Pink Floyd, released in 1987. It is their first album not to feature Roger Waters, who left the band in 1985. Along with More and The Endless River, it is their only album to feature David Gilmour on all the lead vocals (except for some spoken word by Nick Mason). Additionally, as drummer Nick Mason considered his skills too rusty to contribute much, Gilmour ended up writing all the songs either by himself or with the aid of outside writers, paralleling Waters' unilateral involvement on The Final Cut and Syd Barrett's on The Piper at the Gates of Dawn.

The album is also Pink Floyd's first since Obscured by Clouds to not overtly revolve around a single central concept, instead featuring a number of vignette stories in the vein of the band's early work. Despite that, loose themes of change and exploring new frontiers frequently pop up in the songs, reflective of Waters' departure and the band's new leadership under Gilmour.

The album marked a commercial return to form for Pink Floyd after the relatively low sales of The Final Cut, topping the New Zealand Albums chart and peaking at No. 3 in both the UK and the US, going on to be certified quadruple-platinum in the US, triple-platinum in Canada, double-platinum in Switzerland, platinum in Argentina, Australia, France, and Spain, and gold in the UK, Austria, Germany, the Netherlands, Norway, Portugal, and Sweden. "Learning to Fly" became a major hit from this album, topping the Billboard Album Rock Tracks chart (though it placed at a more modest No. 70 on the Hot 100 and missed the UK Singles chart entirely) and introducing the band to the MTV Generation. The Waters-less lineup launched Pink Floyd's first full-scale tour in a decade supporting the album, which lasted nearly two years, culminating in the band's 1990 Knebworth show. The run ended up becoming the highest-grossing concert tour of the entire 1980s, raking in $135 million in profits and 5.5 million attendees in total.

A trope in tension that's learning to fly; condition grounded, but determined to try:

"There's an unceasing wind that blows through this night
And there's dust in my eyes, that blinds my sight
And silence that speaks so much louder than words
Of promises broken."