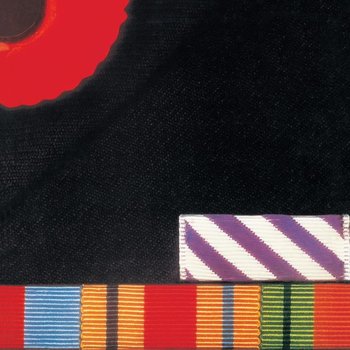 "Through the fisheyed lens of tear-stained eyes..."
Advertisement:

The Final Cut is the twelfth studio album by Pink Floyd — er, by Roger Waters, performed by Pink Floyd — released in 1983. It is their last album to feature Roger Waters, and their only album not to feature Richard Wright at all (Wright appeared on their following album, A Momentary Lapse of Reason, albeit as a very minor session musician providing the occasional bit of keyboards and backing vocals; he didn't regain official status until The Division Bell). In his place, the album's keyboard parts were performed by both Status Quo member Andy Bown and returning collaborator Michael Kamen, who also contributed orchestral arrangements.

Originally created with the intent of making a soundtrack album for the film adaptation of The Wall, incorporating several tracks that were left on the cutting room floor during the making of that album, the direction of this record radically shifted with the onset of The Falklands War. Waters, who was vehemently anti-war as a result of his father's death in World War II, decided to center The Final Cut around protesting the new armed conflict with Argentina. The direction resulted in Creative Differences between Waters and his bandmates— especially David Gilmour— and as result, Waters acted as the sole songwriter and lead vocalist on the album (only sharing vocals with Gilmour on "Not Now John").

Tying in with Pink Floyd's longtime affinity for surround sound, the album was one of the first to utilize the Holophonic system, an experimental engineering technique that used post-processing effects to emulate a binaural recording without the use of a binaural microphone; Waters would later reuse the Holophonic system on his debut solo album, The Pros and Cons of Hitchhiking, the following year. The experiments with Holophonics both here and there would presage Waters' flirtation with QSound on his 1992 solo album Amused to Death (often described by analysts as a Spiritual Successor to The Final Cut) and Pink Floyd's 5.1 remixes of their '70s albums in the 21st century.

Due to the tensions between Waters and Gilmour, this was Pink Floyd's first studio album not to have a supporting tour. To promote the album, a 19-minute video EP of four songs, "The Gunner's Dream", "The Final Cut", "Not Now John" and "The Fletcher Memorial Home", directed by Waters' then-brother-in-law, Willie Christie, was released on home video and aired on MTV. Alex McAvoy, who played the Teacher in the film adaption of The Wall the previous year, appeared as a World War II veteran in the short film.

As a result of the album's tense production, Pink Floyd went on hiatus. During this time, the trio focused on various solo projects: Waters released and toured for The Pros and Cons of Hitchhiking, Gilmour put together his second solo album, About Face, and Mason released the collaborative album Profiles with 10cc guitarist Rick Fenn. In December of 1985, Waters resigned from Pink Floyd, calling it a "spent force" and pushing to have the band legally dissolved by order of the High Court. In a 2004 interview with Uncut, Waters claimed that his resignation was caused by a lawsuit filed against him by his bandmates and Columbia Records, the band's U.S. label at the time, which would've forced him to make another Pink Floyd record with greater creative contributions from his bandmates or face financial ruin. Despite Waters' efforts, Gilmour and Mason chose to continue the band without him, leading to messy legal issues anyway in the form of a trademark dispute that would last the next two years, even after the release of the band's first post-Waters album, A Momentary Lapse of Reason.

The Final Cut is occasionally subtitled A Requiem For The Post-War Dream By Roger Waters. In addition to the video EP, it was supported by just one single: "Not Now John", as well as promotional releases of "Your Possible Pasts" in the US and Canada as well as "The Gunner's Dream" in Brazil. The non-album single "When the Tigers Broke Free", initially released to promote the film adaptation of The Wall (in which it was included), was later added to the album in 2004 and has been part of the official tracklist ever since. Incidentally, when the song was first released as a single in 1982, it was billed as a track from this album, making its retroactive inclusion an overdue case of tying up loose ends.

Preceded by The Wall. Succeeded by A Momentary Lapse of Reason.

Oh Maggie... Maggie what did we trope?: