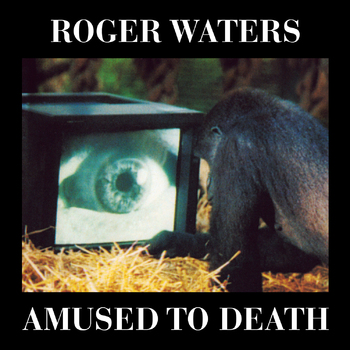 "The human race has civilized itself."
Advertisement:

Amused to Death, released in 1992, is the third studio album by English Progressive Rock musician Roger Waters. Initially conceived as a sequel to his 1987 sophomore album Radio K.A.O.S., the album underwent a radical change in concept after the Tiananmen Square protests and massacre in 1989 and the outbreak of The Gulf War the following year, with Waters becoming particularly disconcerted with how media reporting on the latter seemed to characterize it closer to a sporting event than a war.

Having developed under similar conditions as his last album with Pink Floyd, 1983's The Final Cut, and with Waters having staged a live performance of The Wall in 1990, the record consequently saw Waters move away from the synth-heavy style of Radio K.A.O.S. in favor of expanding on the sound that he'd developed both with his old band and on his solo debut, The Pros and Cons of Hitch Hiking, returning to the elaborately produced Arena Rock that had characterized his latter-day Pink Floyd work while expanding on its blues elements.

Though the album was influenced strongly by armed conflict and Waters' antiwar views, the album is more opaque than The Final Cut in its discussion of the topic, instead leaning more closely into the influence of mass media in the context of the Gulf War. Taking influence from Neil Postman's 1985 book Amusing Ourselves to Death, the album loosely revolves around an ape watching television and switching channels at random, providing various glimpses into a society deep in the thrall of media-fueled complacency and decay. Postman himself, while indifferent towards Waters' work, would express appreciation for the way that the album elevated his image among younger listeners.

Furthering Waters' longtime interest in surround sound experimentation, the album was mixed in QSound, a type of software that attempts to emulate surround sound through stereo speakers. Like the Holophonic mixing on The Final Cut, Amused to Death utilized QSound for a variety of atmospheric effects throughout the album. Furthering this, the album would eventually receive a 5.1 mix in 2015 on both Super Audio CD and Blu-ray, together with a slightly Re-Cut remaster of the original 1992 QSound mix on CD and digital platforms.

Upon release, Amused to Death reached No. 8 on the UK Albums chart, marking the first UK top 10 album of his solo career and his highest chart position in Britain since his days with Pink Floyd, and No. 21 on the Billboard 200, later being certified gold in Australia and silver in the UK. The 2015 remaster, meanwhile, would top the Dutch Albums chart and peak at No. 10 in the UK.

Amused to Death was supported by three singles: "What God Wants, Part I", "The Bravery of Being out of Range", and "Three Wishes". Although Waters initially didn't support the album with a tour, he would eventually include material from it in his 1999-2002 world tour In the Flesh, titled after the supporting tour for Animals that gave birth to The Wall.

The troper and the admin took the keyboard from its hook, the monkey in the corner wrote the trope down in his book: