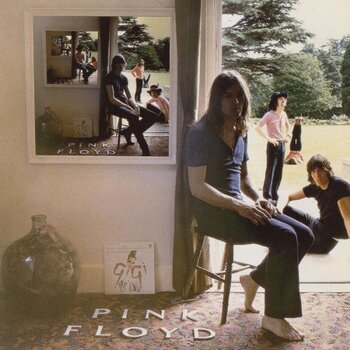 "That was pretty avant-garde, wasn't it?"
Advertisement:

Ummagumma is the fourth studio album and debut live album by Pink Floyd, released in 1969. Although the live half of the album remains popular to this day, the studio half of the album generates strong mixed feelings and is often viewed (even by the band itself) as a failed experiment. Whether it was or not, it remains an oddity in the Floyd catalogue, particularly because it's essentially four solo albums in one; each member got half an album side (about 10 minutes or so) to play with. Despite its eccentricities, the album remains a fan favorite and one of the best-selling pre-Dark Side releases, going platinum in the U.S. (sales of at least one million copies) in 1994, likely because the first disc was the only official live album from that era available until the release of the Early Years box set.

Careful with That Trope, Eugene: