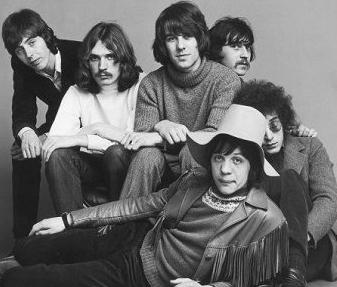 We skipped the light fandango,
Turned cartwheels 'cross the floor,
I was feeling kinda seasick,
But the crowd called out for more,
The room was humming harder,
As the ceiling flew away,
When we called out for another drink,
The waiter brought a tray.
"A Whiter Shade of Pale"
Advertisement:

Procol Harum is an English Progressive Rock and Baroque Pop band founded in 1967. The group's membership has changed frequently, the only constant member being singer/pianist Gary Brooker, although lyricist Keith Reid contributed to every album except the 50th anniversary Milestone Celebration Novum. The group recorded 10 studio albums before disbanding in 1977, then reunited in the 1990s, having recorded two more studio albums since then and continuing to perform live up to the present.

According to this page

, the band's first manager, Guy Stevens, happened to look at a pedigree certificate for a cat named "Procul Harun", and immediately suggested it as the band's name. (The cat's owners actually called him "Claude"; "Procul Harun" was only a name chosen by the cat breeder. The "Procul" part was the breeder's registered prefix, and "Harun" is an Arabic equivalent of "Aaron".)

Gary Brooker died of cancer in 2022, presumably bringing an end to the band.