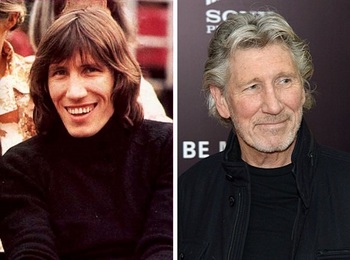 "Don't look so afraid, I'm only joking!"
The alien comic lied
The jackass and hyena took the feather from its hook
The monkey in the corner wrote the joke down in his book
—Roger Waters, "What God Wants, Part I"
Advertisement:

George Roger Waters note He dropped his first name at the start of his career (born 6 September 1943) is the former bassist, singer-songwriter and second leader (After Syd Barrett) of Pink Floyd. Waters left the band in 1985 (see more on the dedicated Pink Floyd page), but his solo career started earlier.

Though he (understandably) is most famous for his work with Pink Floyd, he has had respectable success as a solo artist. Waters has released four solo albums so far. Three of these, The Pros And Cons Of Hitch Hiking, Radio K.A.O.S. and Amused To Death, are rock-oriented concept albums similar to the work he did with Pink Floyd, but Ça Ira, is an opera. After more than a decade, Waters returned with Is This the Life We Really Want?, an album which he is currently promoting through his Us and Them world tour, which he has stated might be his last tour.

In addition to his albums, Roger does a lot of touring, most notably his The Wall tour of 2011-2012, in which he played the entire Pink Floyd album. It remains the most successful tour of all-time by a solo artist, as well as one of the most expensive tours period. He also co-wrote the 1970 soundtrack album Music From The Body and significantly contributed both original songs and score to the 1986 film When The Wind Blows.

This page has troped itself to death: