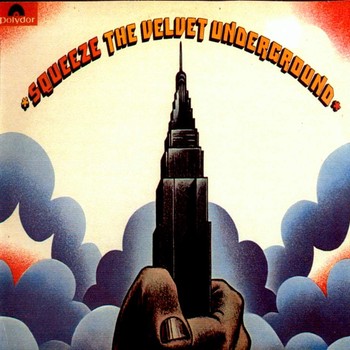 "Now I'm grown, I'm on my own, running free and wild."
Advertisement:

Squeeze is the fifth and final studio album by The Velvet Underground (mostly In Name Only), released in 1973. It is their first and only studio album made after the departures of Lou Reed and Sterling Morrison. Maureen Tucker— as well as relative newcomers Willie Alexander and Walter Powers were supposed to appear on the album, but were all dismissed by the band manager before recording started. As a result, Squeeze would become a Doug Yule solo album in all but name, with him playing the majority of the instruments. Interestingly, Ian Paice of Deep Purple played drums on this album.

Upon release, the album bombed and the Velvet Underground broke up for good shortly after. Time has done little to vindicate this album, and for long periods of time this album has been out of print. It is also often left out of the canon by both fans and the band themselves— for better or worse— and as a result it has never been reissued on a physical format. That said, it did eventually get added to streaming services, so anyone curious to hear it can still do so officially. Anyone looking for a physical copy though is still forced to Keep Circulating the Tapes.

For the rock band of the same name, see Squeeze.