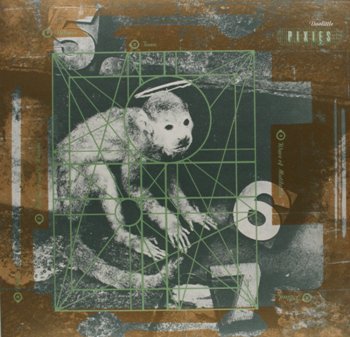 "Got me a movie, I want you to know..."
Advertisement:

Doolittle is the third studio album by Pixies, released in 1989. Compared to their previous two releases, this one had slicker production thanks to Gil Norton, a Briton who had previously worked with the Pixies' 4AD Records labelmates and New England neighbors Throwing Muses. At the same time the band rocked louder and harder than ever. It's also noteworthy as the band's first album for their American distributor, Elektra Records.

The result brought the band a lot of attention. Doolittle made the top ten in the UK, while also charting in the US and France. It's been acclaimed as a favorite by PJ Harvey and Nirvana's Kurt Cobain, among others. The opening track, "Debaser", ended up being a particularly important track in the Pixes' legacy: David Bowie's thrash/grunge supergroup Tin Machine made the song one of their concert staples (Bowie himself was a huge fan of the Pixies), and Cobain cited it as one of Nirvana's main musical inspirations for their 1991 Breakthrough Hit "Smells Like Teen Spirit". It is also their most popular album, being certified gold (sales of over 500,000 copies) in 1995 and platinum (sales of over one million) in 2018 by the RIAA.

There is a trope so long (so long, so long):