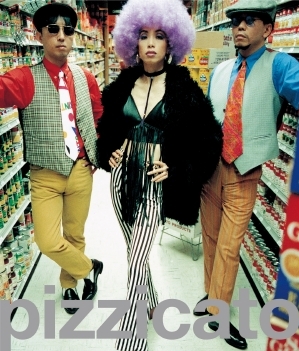 A new stereophonic sound spectacular.
A Japanese pop group active from 1986 to 2001, Pizzicato Five (known in a beginning as "Pizzicato V" and often known simply by the initials P5) was best known to audiences in the West in their later incarnation as a duo of Maki Nomiya and Yasuharu Konishi. The group, widely credited (along with Flipper's Guitar) with spearheading the Shibuya-kei movement of Tokyo in the 1990s, was influenced by genres as distinct as Bossa Nova, Soul, Yé-Yé, Chanson, Funk and 60's English pop music.
Advertisement:
Partial Discography
Albums