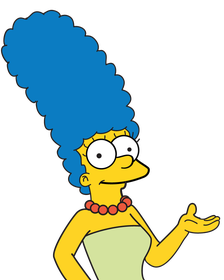 The Beehive Hairdo is a woman's hairstyle in fashion in the 1960s, in which long hair is piled high above the head and cemented with plenty of hairspray. A few elderly women could be seen sporting the beehive into the 1990s, at which point it became more of a gag and/or trope hairstyle than anything real. They seem to have made a small comeback in the last few years, thanks to celebrities from shows like Jersey Shore making "poofy hair" trendy again. It is named as such because it resembles a Stock Beehive in shape.