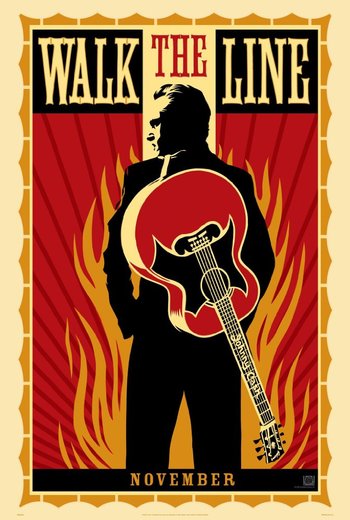 "I'm asking you to marry me. I love you, June. Now I know I said and done a lotta things, that I hurt you, but I promise, I'll never do that again. I only want to take care of you. I will not leave you like that Dutch boy with your finger in the dam. You're my best friend. Marry me."
— Johnny Cash to June Carter
Advertisement:

Walk the Line is a 2005 Biopic on the life of Country Music singer Johnny Cash (Joaquin Phoenix), directed by James Mangold. Based somewhat on Cash's real life, it follows him through his formative years as he loses his brother to a sawmill accident, and then joins the Air Force. Later on, he returns to the U.S. and tries to work as a salesman, but ends up signing to Sun Records because his heart is in the music business. Along the way, he marries and then divorces his first wife, Vivian, then meets and befriends June Carter (Reese Witherspoon). After some drug-induced tumult, he eventually cleans up and performs his now-legendary concert at Folsom Prison. Johnny and June then perform a concert in Canada, where he interrupts a song to propose to her. She accepts. (No, this wasn't a Hollywood romance ending. That really did happen.)

The film was met with generally positive reviews, praising in particular Phoenix's and Witherspoon's roles, as well as the fact that both actors did all of their own singing and instrument playing. It grossed over $186 million worldwide and won Witherspoon several awards, most notably the Best Actress Oscar, and is often considered her best work to date. One noted critic of the movie was Rosanne Cash, Johnny's daughter from his first marriage, who said it was "painful"; Rosanne had a very good relationship with her stepmother June, and even spoke at her funeral. Mangold justified the somewhat unflattering portrayal of Roseanne's mother Vivian by saying that as a character, she was being seen from Johnny's perspective as he fell in love with June.

Walk the Line provides examples of: