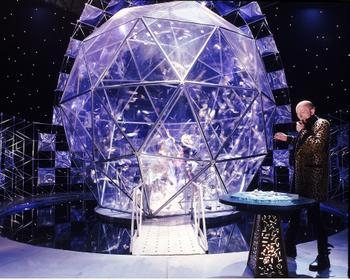 The Crystal Maze is a British Game Show that originally ran from 1990 to 1995, initially hosted by Richard O'Brien and later by Edward Tudor-Pole, and produced by Treasure Hunt and Fort Boyard creator Jacques Antoine. (Channel 4 originally wanted Fort Boyard, but couldn't get at the fort itself as the French series was massively popular at the time.)

Each week, six contestants would have to complete a series of challenges in four adventure zones (originally Industrial, Futuristic, Aztec and Medieval. In the fourth series, Ocean replaced Industrial). Completing these challenges would mean receiving a time crystal. If contestants failed to leave the room (crystal or not) before time ran out, or broke certain rules in some games, they were locked in and could only be released in exchange for a crystal.

The final part was always the Crystal Dome, where contestants would have a certain amount of time (determined by how many crystals won - 5 seconds per crystal) to collect gold tokens* more like tickets or bills blown about by a big fan. Silver tokens were also present and these would result in a deduction from a score (which could - and often did - lead to a negative total score). If they got 100 or more after deductions, they would win prizes: usually adventure holidays in B-level British resort towns.

Most of the show's appeal came from the wonderfully eccentric Richard O'Brien (of The Rocky Horror Picture Show fame) and the way he would present the show: his manic, restless behaviour; his razor-sharp put-downs of (frankly bad) team performances; and how he would always play that damn harmonica at the most inappropriate and distracting times. Edward Tudor-Pole never had a chance. It also became common for the viewer base to start shouting at the screen at the contestants when they missed the very obvious solutions. (Extracts from the show's blooper reel that have been leaked onto YouTube reveal that, in the privacy of the technical gallery, the show's director did it too.)

Although it wasn't very apparent to the viewer most of the show was in fact fixed: for example, it was the production staff, not the Captain, that decided what games to play (Physical, Mental, Skill or Mystery), and was in fact decided well in advance of the show. Although on screen it looks instantaneous there was also a significant length of time between a contestant entering a puzzle room and actually playing it, sometimes in the region of 15 minutes. This was so the crew could set up equipment such as cameras and in some instances actually reset the game if the player in question mucks up too badly in order to keep it interesting to the viewer. A far more in-depth list can be found on the other Wiki.

There were also Spin-Off Gamebooks, set in a more elaborate version of the Maze: The Crystal Maze Adventure Gamebook by Dave Morris and Jamie Thompson aimed at teens and adults, in which the more "realistic" maze was justified by it being set a hundred years in the future, with advanced holographics and robotics (including the robot host ROB); and four targeted at younger readers (The Crystal Thief, Tea at Rick's, The Sacred Necklace and Phantom in the Tower all by Peter Arnold), which just Handwaved it.

The show remains a classic and repeats are still shown in syndication. In particular, it was and remains very popular amongst University Students, though there have been no DVD releases as yet. In 2015, it was announced that a "live immersive experience" in central London with Richard O'Brien's involvement would launch funding through IndieGoGo

, which eventually opened in March 2016. Later that year, alongside a second live venue in Manchester being announced, a one-off Celebrity Edition Revival was shown on Channel 4, this time with Stephen Merchant as the host, raising money for the charity Stand Up To Cancer.

Due to the popularity of the "Crystal Maze Experience" and the celebrity revival, Channel 4 commissioned a brand new series to be hosted by Richard Ayoade and broadcast in 2017, including a number of celebrity specials. Changes to the revival include the change from six random contestants to a group of five acquaintances, the return of the Industrial zone, and redesigns to the Future zone and the Crystal Dome. Medieval zone was ditched in 2019 in favour of the new Eastern zone, meaning that only Future and Aztec have been ever-present now.

A U.S. version premiered on Nickelodeon in 2020 hosted by Adam Conover (of Adam Ruins Everything fame). This version whilst also filmed on the UK set this time features teams of families, with the youngest family member being the team captain.