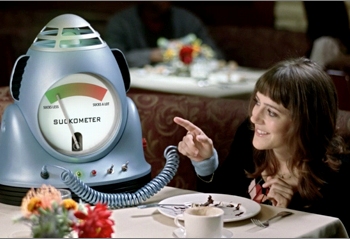 Commonly seen as the Laugh-O-Meter or Applause-O-Meter, which is based on the Clap-O-Meter

They're usually not very reliable, as their indicators are prone to going off-scale or even breaking. They generally measure things on an Abstract Scale.

Though popularized by game shows and the like, this trope is Older Than Radio at the very least: William Hogarth's 1727 satirical engraving Masquerade Ticket features "a pair of lecherometers, showing the company's inclinations as they approach 'em."

Not to be confused with any of the meters used in games (like Karma Meter and Awesomeness Meter). Compare Thing-O-Matic, The Little Detecto, Everything Sensor and 20% More Awesome.