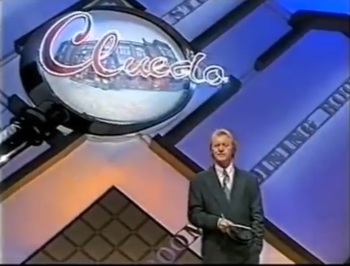 Cluedo was a TV gameshow made by Granada for ITV and broadcast from 1990 until 1993. It was based on the board game Cluedo and produced in association with the game's owner Waddingtons Games and Action Time. It bore some resemblance to an earlier ITV gameshow, Whodunnit? (UK), in that each edition featured a short murder mystery, with teams of studio guests giving the task of finding the killer. In Cluedo the six possible murderers were the six characters from the board game - Mrs Elizabeth Peacock, Miss Vivienne Scarlett, Mrs Blanche White, Colonel Mike Mustard, Reverend Jonathan Green and Professor Peter Plum - who were played by different actors in each series. The setting for each mystery was Mrs Peacock's country mansion, Arlington Grange (not Tudor Close as in the board game).

As in the board game, the contestants had to use deduction and process of elimination to identify in which room the murder took place, with what weapon and which of the suspects was the killer, being given six options for each. Following a short introduction from the studio host, the two teams of detectives would be shown the pre-recorded drama (filmed on location at Arley Hall in Cheshire) and would then be given the chance to question the suspects - the actors appearing in the studio in costume and in character - before making initial accusations. They would be told how accurate these were, though no one ever got all three elements right first time. After the commercial break they would then be shown a second video clip with one or more previously unseen additional scenes and had to work out how, if at all, this "new evidence" changed things. More questioning would follow before the teams made a final accusation, one of which always fortunately turned out to be correct. The murderer would then turn to camera and make their confession, explaining their motive for the crime, part of which would be voiced over a final clip showing the lead-up to the murder (although, since this went out at 7pm, the actual moment of the killing was always faded out or freeze-framed).

Four series and a Christmas episode were made, hosted by James Bellini, Chris Tarrant and finally Richard Madeley. In the first series each team consisted of one celebrity and one member of the public involved in criminal justice or detection (police officer, forensic scientist etc.) but from series two this changed to two celebrities. The six weapons from the board game only appeared together once, in the Christmas special, and in other editions a wide variety of possible weapons were used or suggested, from croquet mallet to insecticide. There were no prizes whatsoever for the contestants, although in series 3 viewers were given the chance to phone in and win a murder mystery weekend by answering an observation question based on that night's mystery.

Many well-known TV actors of the time guested as that week's victim, always a ghastly type whose presence spelt trouble for the six inhabitants of Arlington Grange. The regular cast was of a similarly high calibre and the parts were played as follows:note In order: Series 1, 1990 Christmas special, Series 2, Series 3, Series 4.

This series is not to be confused with the board game Clue (Cluedo in the UK) or with the American film Clue which was also based on it.

emphasising the beginning of "please" for a little too long.