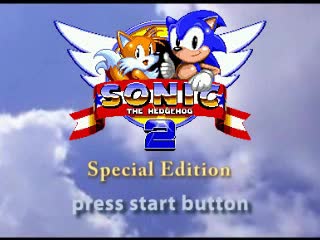 If madness were a video game, this would be its title screen.
"Can God create a game so bizarre, that even He could not play it? Y/N" Answer: "It depends on whether you need to specifically believe in a classical Judeo-Christian ideal of omnipotence for this corny paradox to even work. Don't waste my time with this Philosophy 101 crap."
— Mystic Cave Zone Boss
Advertisement:

Some people remember Knuckles Chaotix, the only Sonic the Hedgehog game to appear on Sega's 32X console. Far fewer remember this Sonic game that almost appeared on the doomed console.

Sonic 2: Special Edition was originally conceived as an Updated Re-release of the extremely successful Sonic the Hedgehog 2, but this was complicated when Sonic Team decided to take advantage of the capabilities of the 32X by adding a ton of new content, to the degree that many of the later levels bore only a passing resemblance to those in the original game. By 1996, the game was a few months away from its release date, and the ballooning project had barely avoided collapsing under its own weight — then Sega's decision to cease supporting the 32X caused the project to be canned altogether. The legend of this game persisted for years afterwards, as copies of the beta (and a rumored handful of finished games, manufactured but never sold) were highly sought after by hardcore collectors, but none ever turned up...

Then in 2007, on the Something Awful forum, docfuture (aka Robotnik DDS) revealed that he had a copy of Sonic 2: Special Edition, given to him as a present by his uncle (a Nintendo employee who pulled a few strings to get the game... or maybe he just bought it from Chinese bootleggers—it's not clear). Further, he decided to start a Let's Play thread to share this weird piece of Sonic history with the entire world.

From watching the LP, it's clear that, had Sonic 2: Special Edition been released, it would've been the greatest game ever made. While rough at some points, it is clear that if development continued, it would have been a classic that would have influenced games to this day.

What's that? You doubt that this game actually exists? Oh, so you're the one responsible for the shoddy graphics...

As may be gathered from the tropes below, Sonic the Hedgehog 2: Special Edition is an elaborate hoax LP by docfuture, spanning everything from the surreal to the horrific. docfuture's LP can be watched here

on the Let's Play Archive, or here