Series / Queen for a Day

"Would you like to be queen for a day?!"
—Jack Bailey's opening catchphrase, possibly uttered whilst under the influence. 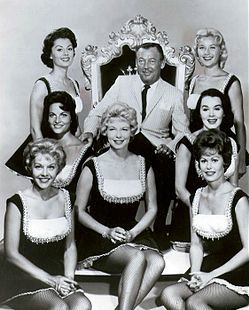 Game Show where four (sometimes five) women shared their stories of woe in front of an audience and emcee, such stories ranging from a dearly-departed husband to a son crippled with polio. After all the ladies finished, the audience would applaud for the woman they wanted to see become "Queen for a Day". The winner (determined by the famous Applause Meter) received not only what she had originally asked for, but a slew of other prizes furnished by the show's sponsors. The show was created and executive produced by John Masterson, who would later enjoy greater success as the creator of The People's Court.

Debuting on the radio on April 30, 1945 as Queen for Today on the Mutual Broadcasting System

with Ken Murray as host and with John Masterson producing the show through his eponymous production company, John Masterson Productions, the show was originally broadcast from New York. A few months into the run, the show moved to Los Angeles and was given its more familiar title; Murray was replaced by Jack Bailey, and beginning in 1948 the show was simulcast on television in the local Los Angeles market through DuMont affiliate KTSL-TVnote Later to be purchased by CBS and renamed KNXT-TV, and later still, KCBS-TV., whose owner, the Don Lee Network, also owned KHJ-AM, Mutual's Los Angeles affiliate.

The show proved to be so popular that it got national television exposure on NBC from January 1956 to September 1960, then over the weekend moved to ABC and continued until October 1964. When the show moved to NBC, The Raymond R. Morgan Company also signed on as a production company and co-produced the first two seasons until 1958, after which John Masterson resumed sole production and formed the dummy company Queen for a Day, Inc. to hold the show's copyright. Two Revival attempts, a 1969-70 syndicated run helmed by Dick Curtis and produced and distributed by Metromedia

Producers Corporation, and a 2004 Lifetime one-off hosted by Mo'Nique and produced by The Gurin Company, both ended in failure.

But opinions varied. While some praised Queen for helping the unfortunate and showcasing the generosity of America, both contemporary and modern critics bashed it for being a sickening spectacle for ratings that seemingly only gave anything helpful to the winner — basically a crass, trashy, exploitative Reality Show (long before that term existed) that explicitly played on people's misery.

Modern viewers have also noted that Bailey was often downright patronizing toward the contestants, if not openly insulting — while they talked about a myriad of unfortunate events such as losing their homes or suffering through terrible medical problems, he threw out sarcastic barbs and jokes at their expense. Thus, what was seen as wholesome back then comes off as downright creepy and sleazy in modern times.