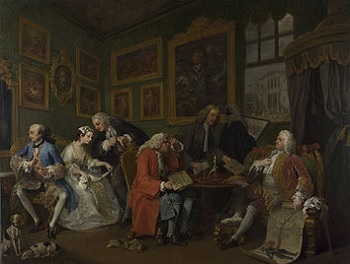 The first painting, The Marriage Settlement. The "happy" couple are on the far left.
Advertisement:

is a series of paintings by the English artist William Hogarth, originally painted from 1743-45. In the paintings, Hogarth skewered the idea that the wealthy lived virtuous lives by depicting a disastrous Arranged Marriage between the son of the bankrupt Earl of Squanderfield and the daughter of a rich but corrupt merchant and city alderman. There are six paintings in all (titles as given on the frames):

From the very start, the engaged couple couldn't be less interested in each other, and are soon both embarking on affairs while frittering away their finances and neglecting the daughter they have together, problems that are only exacerbated by the death of the old Earl and the passing of his title on to his son. The Countess, in particular, has an affair with Silvertongue, one of the lawyers who draws up the marriage contract, and when the young Earl discovers them in bed together, he challenges Silvertongue to a duel. Unfortunately, he is a poor swordsman and is fatally wounded, and when Silvertongue is arrested and hanged for the Earl's murder, the Countess poisons herself.

The paintings are owned by the British government and are displayed in the National Gallery in London. As with most of Hogarth's work, the paintings were at least partly intended to serve as the models for engraved copper plates from which prints could be produced for mass distribution (Hogarth firmly believed that art should not be accessible only to the upper classes); the resulting prints are horizontally reflected relative to the paintings.

These paintings contain examples of the following tropes: