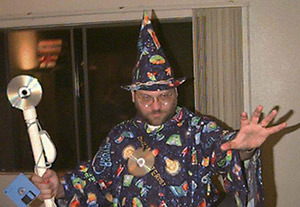 WIRELESS WIZARD!!!
"We are dreamers, shapers, singers, and makers. We study the mysteries of laser and circuit, crystal and scanner, holographic demons and invocations of equations. These are the tools we employ, and we know many things."
— Elric the Technomage, Babylon 5
Advertisement:

The Techno Wizard is the guy or girl who can make a computer or electronic device do anything.

Among other things, they know all the Omniscient Databases; they know how to use the Enhance Button and the Facial Recognition Software for the best results; they can look at a wall covered with Billions of Buttons and immediately figure out which unlabeled one is the one that turns off the Self-Destruct Mechanism; they can jury-rig an iPod into an Everything Sensor.

They may or may not be a Mad Scientist as well, depending on how fantastic the show is. They will often have Machine Empathy, especially for devices they use regularly. Expect lots of Hollywood Hacking.

Compare the Gadgeteer Genius, who is more mechanically inclined than electronically inclined, and the Technopath, who is capable of magical control over technology. Not to be confused with Magic from Technology. When genuine magic is integrated with technology, see Magitek.

Despite their names, Techno Wizards may not be able to create a Robot Wizard (robots that can actually perform wizardry).

Doesn't necessarily have to do with the music genre Techno, though in that case you might be looking for Magic Music.