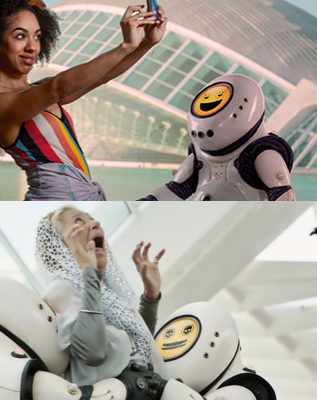 A Sub-Trope to the Dystopia, a technological dystopia — that is, a dystopia caused by the introduction of new technology, not just one featuring it — is a Bad Future setting that isn't particularly crapsack. It looks nice and clean, and normal, and progressive — maybe even overly nice and fluffy. Robot servants wait on your every need, death is at an all-time low and everyone looks happy.

Don't thank the robots and you'll be imprisoned for social rudeness. Death is not a way out. Nobody knows the truth, or Happiness Is Mandatory.

Everything is monitored, and technology has replaced enough of interaction to give it unofficial control over the world (either literally or figuratively) so much that one update change or unfixed minor bug could shut a country down. And technology, a human invention, is one clever way to explore more of humanity's flaws and how we have brought this on ourselves.

It's also a useful way to explore if this dystopia could, perhaps, be the world we are living in. It looks like Utopia, but computer says no.

A twist on the setting is to discover that the humans being oppressed are actually some form of robot or synthetic life form, beginning a discussion on what makes a human.

What usually makes it is that the people living there think this is the best the world can get when it's clearly designed for the audience to be appalled at the situation. It usually takes an Audience Surrogate outsider to enter the dystopia or get a knock on the head in order to start up La Résistance.

Typically features the Mega-Corp, AIs that are crapshoots, the 'i' aesthetic, and Killer Robots, often 20 Minutes into the Future. Compare Cyberpunk, a darker and grittier subtrope which takes this concept and combines it with Film Noir-inspired aesthetics/themes.