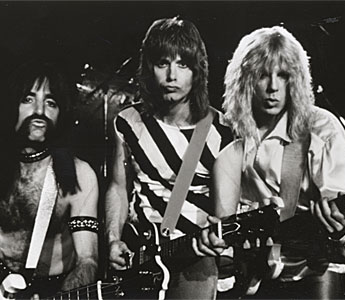 "You wot m8? I canear ya."
Advertisement:

The British Invasion helped cement British artists as big players in the international market. As such many bands or singers found in American media will turn out British. They're generally of the Metal or Rock genre with horrible fashion sense, who take lots of drugs, drink lots of booze, have incredibly high sexual tallies (often going for the weird stuff, too), trash hotel rooms and throw TVs out the window, and are either indifferent or throwing themselves behind whatever good cause might be available. Pierced nose and spiky mohawk optional.

One particular trait is that they're likely to avert I Am Very British, opting for a cockney or Northern accent (usually Liverpudlian or Mancunian, thanks to the existence of famous rock bands from those cities).

A subtrope of The Rock Star, who is usually a more positive, glamorous figure (and they can be British too!).