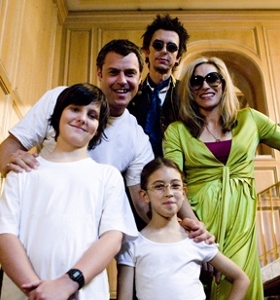 "It's complicated."
Who says romance is dead?
Advertisement:

Suzy Darling is having a rough few days. She just walked out on her unfaithful husband, Steve, taking her children with her to her newly bought penthouse. The penthouse is beautiful with a lovely balcony and it's right next to her dental practice.

Just one problem: It's haunted by the ghost of Nerve frontman, Henry Mallet, whom Suzy alone can see and hear. Suzy has to juggle dealing with Henry's antics and demands, raising her children, settling into her new place, running her dental practice, and dodging Steve's attempts to in turn sabotage her new life and woo her back.

Spirited is an Australian dramedy on W Channel starring Claudia Karvan, Matt King, and Rodger Corser. It aired for two series, before its cancellation in 2011.

Not to be confused with Spirited Away.