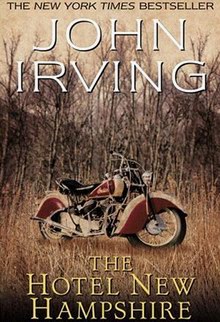 The Hotel New Hampshire is a 1981 novel by John Irving.

The lives of the Berry children—John, Franny, Frank, Lilly, and Egg—are forever marked by their scheming but ever-optimistic father Win as he drags them along through a series of hotels he attempts to run. The ventures never quite fail, exactly, but none of the hotels ever work out as intended. Due to their clientele, the growing children are exposed to an ever-rotating catalog of eccentric characters, including sex workers who entertain their clients right above the children's heads, a group of anarcho-communists preparing an ill-fated explosive demonstration, and a woman who has decided to live her life as a bear.

Needless to say, their strange upbringing leaves its mark on the family, including narrator son John, whose sexual passion for his own sister Franny soon takes over his entire adulthood. But the lesson the Berry family takes away is that there's no wrong way to live a life, as long as you really live it.

It could be said to be Irving's most typical novel; That Other Wiki had a chart of all the recurring motifs in Irving's fiction (bears, prostitution, the city of Vienna, and so on) and The Hotel New Hampshire was the only one of his books to contain all of them.